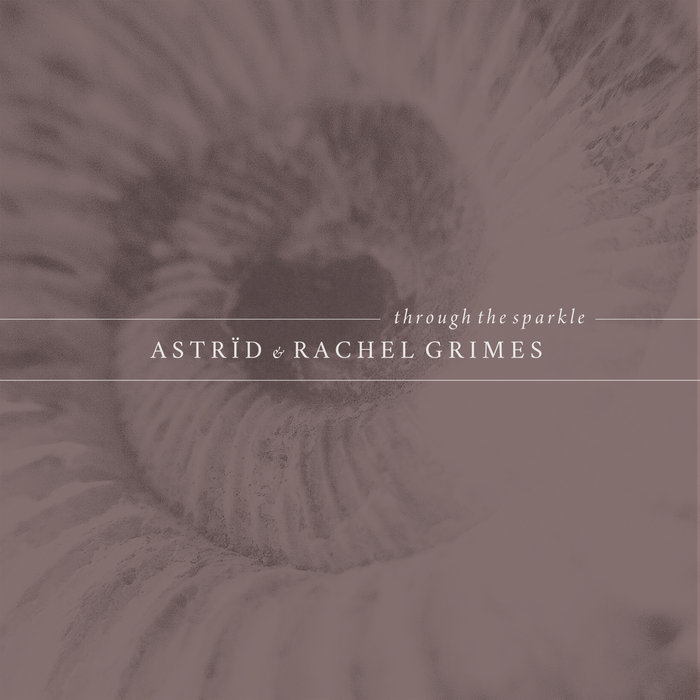 Through the Sparkle is a collaboration between French ensemble astrïd and American pianist and composer Rachel Grimes.

Rachel Grimes is best known for her chamber music project Rachel’s, a hugely influential group formed in 1991 in Louisville, Kentucky, releasing six studio albums between 1995 and 2005. She has also released a string of contemporary classical works in recent years on labels such as Temporary Residence. astrïd is a collective of four musicians based in Nantes, releasing records on Rune Grammofon and Home Normal.

After years of mail and email back and forth over the ocean, from Nantes to Kentucky, astrïd invited Rachel to come for a residency to make music together and play shows in France. They gathered for a few days, here and there, in 2012 and 2013 to write songs in Cyril and Vanina's home studio in the countryside.

The compositions found on Through the Sparkle glow with a unique, connected energy and a pure, instinctive musical understanding. Considered contributions from all sides allow the pieces to unfurl naturally. Each note and phrase feels like it simply couldn’t be placed anywhere else in the album.

Charming, gentle and cinematic sounds are found here in abundance. Melodies circle and reveal themselves without force, allowing the listener to focus and explore the depths of what is on offer. Musically, Through the Sparkle is an expansive and evocative album. There is a presence to be felt throughout, from Cyril Secq’s emotive tremelo’d guitars of M5 to the darker, more haunting mood of The Theme, to the tension in Mossgrove & Seaweed. Strings and woodwind coalesce around intricate piano and guitar movements creating a wealth of harmony and melancholy.

Through the Sparkle is a record of miniature symphonies, of elegant restraint. A gracious and generous offering from a group of musicians at one with each other and at the top of their game.

"What I would like to call it is organic music; natural-blending soundscapes, ambient music without any electronics, and a style that would perfectly fit into a wide range of cinematic scenes, from romantic to film noir." SOUNDBLAB 10/10

"The collaboration benefits both sides. Grimes again has a basket in which to carry her notes. Astrïd has the icing for their cake. Through the Sparkle reflects the glow of an inspired pairing. Soft sparks fly, reflect their scenery, and settle onto a reflective floor." A CLOSER LISTEN

"Through the Sparkle balances shimmering, softly shining upliftingless with shifting shadows. It’s an easy yet rich listening experience which brings with it a sense of the way in which music can enrich the soul."
AURAL AGGRAVATION

• Recorded and mixed by Cyril Secq at the Goulphar studio,
from 2013 to 2015
• Mastered by Lawrence English @ 158
• Artwork by SmilingPaperGhosts​