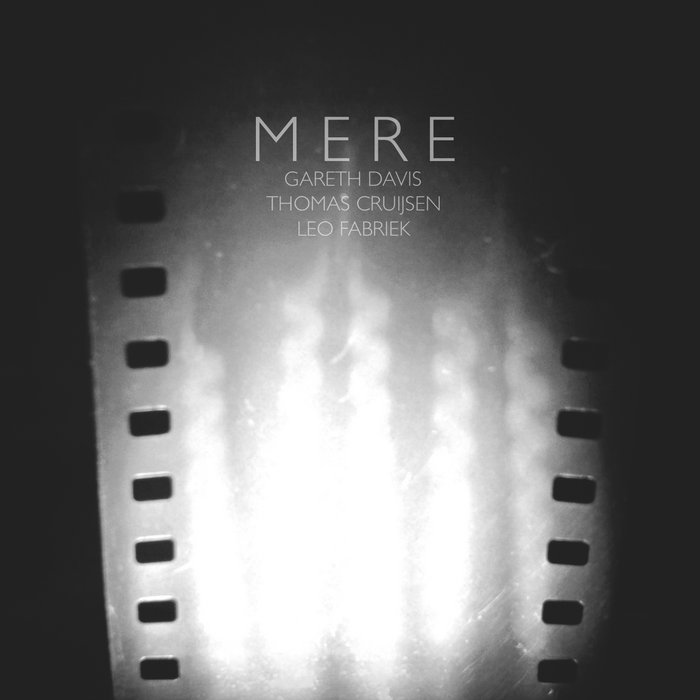 Mere is a new project that began as a soundtrack and continues as an experimental, dark-ambient jazz group. Guitar, drums and bass clarinet provide an intense and improvised journey into the abyss.

The trio first came together to work on a soundtrack for a Dutch TV documentary called ‘Visserman’. Having known each other for some time this was the first time they had combined together to write music and the name Mere comes from the Dutch word for ‘more’.

Each member adds a different influence to the sound, the modal finger picked guitar playing of Thomas adds a sense of movement while Gareth takes both folk and free jazz ideas to play against Leo's free rock influenced drum work. The tracks were recorded all in single takes with just a quick discussion of outline and tuning as a basic guide.

Leo Fabriek releases on Digitalis, Home Normal etc. and is also the drummer with the noise rock band Julie Mittens.

PRESS:
NINE HERTZ
Gizeh Records are like a machine at the moment, seemingly adding to their roster with some of the best quality control ever. Quiet parts fill the void of silence with delicate whisps of noise, while other parts are full of squalking jazz perfection. It's a mad sound, combining not only Naked City-like repetition and chaos, but also a sense of frail, frightened mewlings. It's the kind of album you hope for now and again, highly intelligent but also free of its own limitations, it twists and shakes with a deeply cool mystery.

BOOMKAT
'Mere' is a subtly engaging new group project from Gareth Davis (bass clarinet), Thomas Cruijsen (guitar), and Leo Fabriek (drums) exploring the darker ambient hinterland of improvised free jazz. The trio first worked together on the soundtrack to a Dutch TV documentary called 'Visserman' and the results were strong enough to prompt them working on this 2nd release. 'Mere' meaning 'more' in Dutch, features three finely attuned compositions, a confluence of the trio's compatible but diverse approaches. To Davies' droning bass clarinet, they dub his more expressive sweeps and swallow-diving notes while Thomas Cruijsen's solemn modal finger picking grounds the piece against tempered drum work. No one player foreshadows the others, resulting in a spacious, unimpeded, yet controlled dialogue based on simple principles.

FLUID RADIO
The opening track sees mournful clarinet singing as picked guitar propels the piece forward with a gently building motion. Davis’s clarinet takes on an almost middle eastern hue whilst Fabriek works in gentle free rock percussive techniques, gradually rolling his drums louder into the mix until things culminate in a frenzied free-form crescendo.
Track two pits a bowed guitar hum against tortured clarinet – almost pitiful in its distant screeching with accompanied subtle drum work that resists the temptation to burst into rhythm. The final track is a properly out there 25 minute wig out into the unknown. Bowed guitar, tumbling drums and clarinet squawks form a spiky sea of sound – at times descending into chaos – then gradually reforming for a conclusion of appropriate intensity…
Proper late night excursions into improvised abstract experimentalism – I’d like to see MERE live late at night in a dingy smoky club….

TEXTURA
The opening piece clearly captures Mere's improvised approach in showing all three playing freely and responding in the moment to one another, even if the snake-charming lines of Davis's sinuous playing lead the way before Cruijsen and Fabriek dig in more aggressively as the track progresses.

[sic]
In some ways it makes a lot of contemporary music referred to as ‘post-rock’ seem shallow and timid in comparison. And what’s more impressive is that this music was improvised by just three men: Gareth Davis on bass clarinet, Thomas Cruijsen on guitar, and Leo Fabriekon drums. Each of the three long pieces feels organic, the three instruments blending beautifully as they ebb and flow in unison. Davis’s clarinet growls murkily among Fabriek’s tom-toms, or shrieks like a wounded animal once the music intensifies. Cruijsen’s guitar work is restrained and never showy, droning with atmosphere or bristling with bright, metallic arpeggios. Fabriek rarely plays what could be discernible as a groove; his playing is more exploratory, but without losing a vital sense of cohesion and momentum. These guys know what they’re doing. This is another fascinating and engaging release from Gizeh. Let’s hope there’s another album coming from Mere.

FOXY DIGITALIS
The sound they carry over onto record is certainly cinematic, with each track consisting of clarinet, drums and guitar to create noir, brooding jazz of a kind that should find favour with fans of The Mount Fuji Doomjazz Corporation, The Thing and even – to an extent – Rangda, but allows enough light to shine through the cracks to avoid swallowing the listener completely. The album’s stand-out feature is the space the trio allow each other to operate within. Nothing seems crowded or rushed, which is a testament to the skill with which these three musicians operate, as is the fact these three untitled tracks were largely improvised and recorded live in one take.