Desperate In Her Heavy Sleep 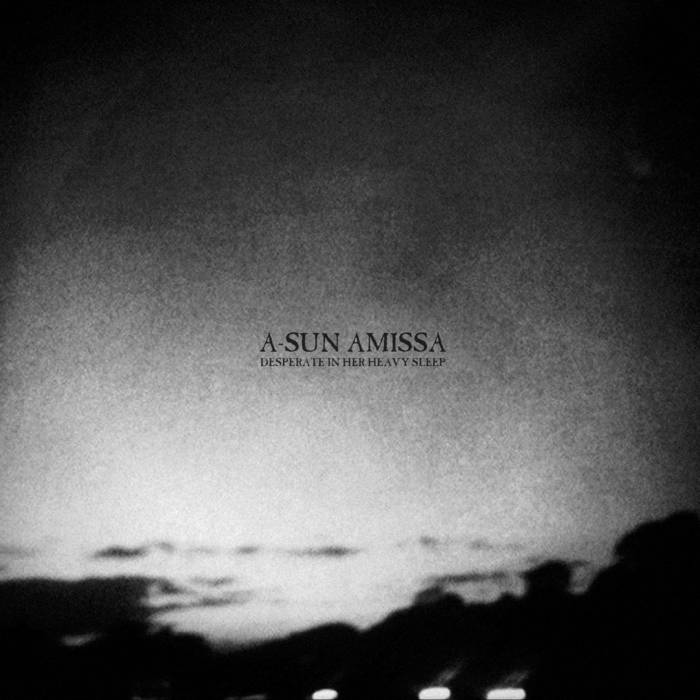 editions vaché A-Sun Anissa is one of our favouorite projects - this cd in particular is on our permanent playlist....from washes and waves of gorgeous sounds, disembodied vocals, and string-heavy swells, we can't get enough. - ss / tm /am Favorite track: Speechless Turns: i. Hung Up / ii. Rejoice Me More Than Mine.

The trio produce a dense, drone-like atmosphere accompanying evocative, melodic string sections and intertwining guitars. The live show features sections of the recorded output combined with improvisation to unlock new movements and progressions in the music. The subtle, considered textures and the hypnotic interaction between players and instruments provide an intense live performance.

October 2011 saw the first recorded output in the form of a 3" CD release as part of Hibernate Recordings' acclaimed 'postcard' series. The release 'Beneath the Heavy Tides' featured two tracks and serves as a prelude to the new record 'Desperate in Her Heavy Sleep'.

ROCK-A-ROLLA
“While the project is only a few months old, the results of this debut are sturdily-fleshed and possessing an atmosphere that could reduce a house party yo a state of nauseating tension. Much of this power comes from a rusted industrial aesthetic that lurks in the periphery of perception, the mechanical hums and wavering synths reminiscent of a foundry gone the way of the dinosaurs, but it’s the trio’s spare string compositions that form the soul. Guitars pick out hazy half-melodies at a glacial rate, a lone cello teases out wave after wave of cold isolation and menace from darkness, and strings are scraped and stretched to the boundaries of audibility. The finished product is an unsettling work that, for all this talk of solitude, is peculiarly both beautiful and comforting.”

[sic] Magazine
“This record ebbs and flows like a sinister tide. It could be Unknown Pleasures, re-imagined by Godspeed You! Black Emperor. Where the Canadians f#a#(infinity) evoked blasted US deserts and canyons, Desperate in Her Heavy Sleep shifts us to a more urban dystopia. Here we’re sheltering under a concrete underpass where glitches crackle like the fires of the homeless. If you carry an already heavy heart to this album you might find the resulting burden too unmanageable.”

FOXY DIGITALIS
"Anyone with a penchant for the ominous builds favoured by Godspeed You! Black Emperor will love this, as long as they can cope without the crashing collapse. Personally I favour it the way A-Sun Amissa do it. So detailed and portentous are the sound worlds built by the Leeds, UK band that they envelope the listener in a cloak of dark glory that becomes almost impermeable once fully developed. A hugely satisfying and darkly compelling piece of work from a group of artists at the forefront of UK drone exploration."

405
"it just feels right – it needs to be happening, it is happening and now my brain is trickling out my ears and I can’t move because I’m in a codependent relationship with sweet, sweet catatonia. On listening to the album’s more moody passages, you can imagine that it is of a certain space. It’s hard not to think of the chip-wrapper strewn streets of a northern city, the sky as grey as the architecture, and the dead march oppression evoked by the strings in ‘A Hungover Whisper: Thin Light Failure / Decay’

THE LINE OF BEST FIT
"The setup sees Knox’s tremolo guitar matched with cello and violin to create a series of droning, chilly and cyclical movements that never let up in their moody ambience...... the highlight – the lovely orchestral swell of ‘A Hungover Whisper’: a gathering storm of a piece of music, with some virtuoso violin work that’s both mesmerising and a pleasure to listen to."

TEXTURA
"Mournful strings, guitars, and dark ambient shadings conjure a haunted, reverberant soundtrack for the end of days, and for one funereal minute after another, cello, violin, and guitars quietly wail, as if caught within some slow-motion death spiral"

FLUID RADIO
“I fear listening to this music on the move, afraid I may end up huddled in corner, cowering and whimpering, mistaking the accidental nudges of fellow passengers of my commute to be the bony hands of death, beckoning me to my demise. There is a firm density of bone crushing weight that lays heavily on the chest yet light on the ears. Paradoxically the tracks remain sparse in their instrumentation, infrequently using more than three (perceived) sound sources at any one given time. A heavy atmosphere despairing face down in open palms.”

WHISPERIN & HOLLERIN 9/10
“Deeply atmospheric, from the outset this album casts long shadows and builds a subtle yet undeniable tension”

TO ELEVEN BLOG
“With Desperate in Her Heavy Sleep the quality that engages me is a constant balance between extremes. This is music that takes me to a place, but is it a good or bad place? Somewhere I’d want to be or somewhere I never want to visit again? Each track features a core instrument and approach, ranging from almost western-soundtrack sounding bass guitar to strings and finally ambient tones. I felt a constant tension between being pulled into the music and pushed back. A-Sun Amissa are playing music that is both beautiful and unsettling at the same time. It’s difficult to differentiate between the two extremes.
When I hear the term experimental music, I frequently question the label as of late. Where is the experiment? With Desperate in Her Heavy Sleep, I hear musicians pushing the boundaries of conveying subtle, nuanced emotion in their work. It’s a compelling listening experience to say the least.”

THE SILENT BALLET
“Desperate in Her Heavy Sleep presents a focused sound that is accomplished and intriguing. The sprawling compositions avoid the mundane repetition that plagues much of the ambient/drone world and instead subtly develops and evolves like the choice work of Stars of the Lid. In today's increasingly crowded drone scene, it has become exponentially difficult for musicians to make a unique, defining statement. With Desperate in Her Heavy Sleep, A-Sun Amissa has our full attention.”

A CLOSER LISTEN
“Drones rise like dust clouds from spurs. While the tone never quite tips into the darkness, it is clearly comfortable with shadow.”

MIGRATE MUSIC
“If you love post-rock mixed with ambient drone, look no further. A Sun Amissa’s music will leave you with more questions than answers. The music is dark, epic, and vast. Your imagination will run wild, and at the same time stand still. A-Sun Amissa has created a deeply textured and layered sound with their release of “Desperate In Her Heavy Sleep.”

FUTURE SEQUENCE"The interaction between players on ‘Desperate in Her Heavy Sleep’ is undeniably what makes it stand above other current / upcoming releases, and proves that it is longevity and the relationship between the musicians themselves is what leads to a group creating some truly magnificent noise."